Launch GIFT on the web

Despite normally running on Windows, GIFT provides utilities to package an instance of GIFT within a Linux-based Docker image that can be run in a Docker environment in order to allow GIFT to run on platforms that normally would not be capable of running on it.

Once the Linux Docker image has been built, it can be used to run a container (i.e. a virtual machine) that already has GIFT inside of it.

Steps to run the Docker container:¶

Steps to stop the Docker container:¶ 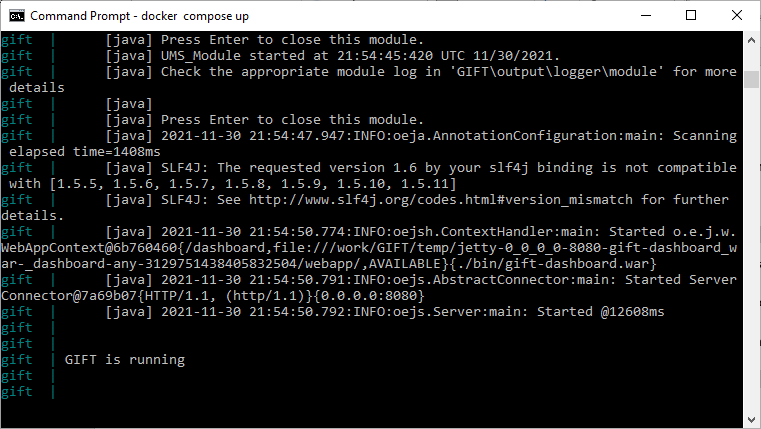 Exporting the Docker Image for Distribution¶

Docker images can be saved to .tar files in order to distribute them and load them into other Docker environments:

Steps to Export the Docker Image¶

The exported gift-image.tar file can be loaded into and run other Docker environments.

Steps to Load and Run an Exported Docker Image¶

Signing in to the GIFT Dashboard:¶

When running in the Docker container, GIFT's output logs are stored in a gift-output volume on the host that can be accessed from outside the container. This volume also persists between executions, so domain session logs from previous executions can be maintained and accessed.

To locate GIFT’s log files, you will first need to navigate to the folder where your Docker volumes are stored on your operating system/platform